This one is just around the corner from my place. It’s long been empty and when the “For Lease” sign went up the prayers for a decent cafe in the area went out. But no, obviously we need a hair-dresser …. Two doors down from another hair-dresser. JESUS! I found out later that a bloke from the PVS Dog Squad lives across the road from the place and actually applied to put a cafe in there (he’s a chef,) but was knocked back by the owner.

Until I can get myself down to the library to do some hardcore research, I’m stuck here, googling away for any information I can find on these old buildings and signs.

My latest journey into the big G’s search algorhythm took me back to the 1980’s rockabilly scene in Melbourne. I managed to turn up a song, written by Melbourne Cajun muso Andy Baylor, called “Melville Milk Bar Blues”. The song was recorded with Graeme Thomas, head of Melbourne based label Preston Records, and named after the building the song was recorded in … The Melville Milk Bar would be my first guess.

Graeme was a rockabilly bass player who started recording in his bedroom in the 80’s … then in his parents lounge room … then in the old Melville Milk Bar when things got too big. I found some great info on the label right here.

FUN FACT: In the article linked above, there is an interview with Dave Philpots of Melbourne band The Detonators. As well as Dave’s wife being my work collegue, another friend of mine, Trent McKenzie, is a bass player and is mates and some-times fill in player for Dave when he can’t make a gig. Trent lives two doors down from the milk bar in the old Melville General Store. So, there you go. 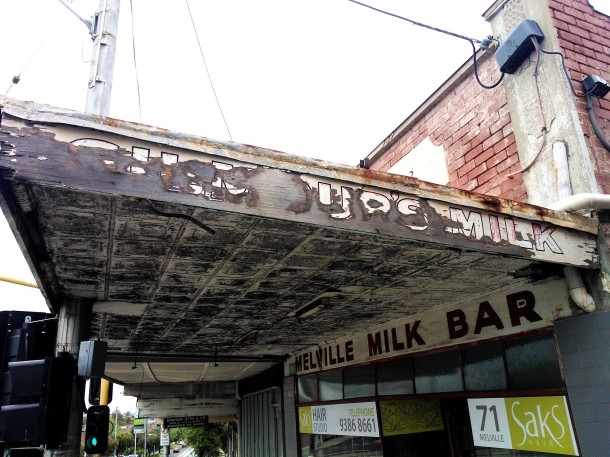 My best guess for the above is “Gilmour’s Milk”. I think I remember seein another sign for Gilmore’s Milk somewhere in the Golden Ailse of Reynard St. I’ll have a peak tonight.

Error: Twitter did not respond. Please wait a few minutes and refresh this page.