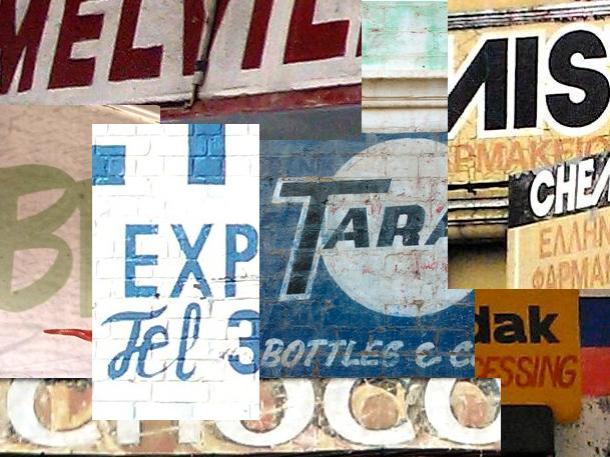 Yes, another blog, my friends. No doubt this will be a highly original, frequently updated, heavily followed, work of genius. The idea behind it nothing short of revolutionary. Insights: mindblowing. Content: ART, MAN.

Or, most likely, it’ll be something I thought was a good idea at the time then ran out of time/motivation to keep up.

So, what is it? Well, I’ve developed a pretty wild obsession with typography in the last year or so. I’m not sure where it came from, really. I started playing around with a bit of graphic design while roughing up some artwork for a CD I released with a band. The idea behind it was inspired by old style movie posters. After looking around online for a while, I realised that a lot of the appeal of this style for me came from the type that was being used. After immersing myself in old-world-movie-poster-land, it seemed like all I could see when I looked at the world around me was type. Specifically, old, faded, hand painted signage. I live in Pascoe Vale South and all around that area, (Coburg, Brunswick,) there are a plethora of old back-street milk bars still bearing the original handpainted signs of old advertisements:  Bushells Tea, Tarax, and The Sun are some of the most common, (seriously, Bushells totally cornered the tea-signage market. They are to singage what Kamal records are to op shops.) But there’s also a ton of old non-advertising signage everywhere. As well as the type itself, this art provides a glimpse into Melbourne’s suburban past, and it tickled the historian that hides way down inside me.

The big one that tipped this whole idea over in my head was actually on a friends place. They bought an old shop front on Reynard St in Coburg a year or so ago. Above the front awning you could vaguely make out some old signage for what looked to be a green grocer, or something. The elements had done their work on the paint pretty well, so it was impossible to work out for sure. (They did have a decent Bushells number on the side, though.) Then a few weeks ago as I wandered over there for a rehearsal, low and behold, the building next door to them had been ripped down, ready for the townhouse apocalypse so familiar to our area. And what was on the previously hidden brick wall? A giant, beautifully preserved sign for Thomson’s Tobacconist and Grocer, Coburg. Phone: FW 2262. Further back along the building was that an absolutely enormous Bushells Blue Label sign, with lettering two metres tall.

Gold. Total historical/typographic pornography amongst the rubble. I was hanging off that temporary fencing like a kiddy at the zoo watching the elephants take a dump.

So, I’ve decided to try as hard as I can to actually follow through with this project and start an online account of old hand-painted signage from around Melbourne. I’ll start local and see how we go from there. I’m thinking I could go suburb by suburb, council area by council area, trawling the back streets and snapping anything that catches my eye. There’s also a few modern works that I wouldn’t mind cataloguing … The gig guide that the Tote’s has painted on the side of the building is a classic, as well as the Prince Bandroom gig guide. Probably getting into the game a bit late on those ones one but what better time to start, hey?!

Melbourne is already well renowned for it’s amazing street art, (of the illegal variety,) and it’s all pretty well catalogued, (insert plug for my mate Pesky’s show, now on as part of the Melbourne Fringe festival,) so here’s me, trying to wedge some history all up in your street art. I’m not a designer, typographer or photographer, but I know what floats my boat and will be trying to keep this thing alive for as long as it’ll have me.

Error: Twitter did not respond. Please wait a few minutes and refresh this page.